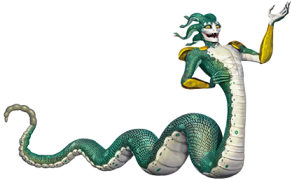 Polytheus applies Centopia as a traveling merchant. He gives everything, as long as the price is right. You should never trust him because he is always on his own benefit and wealth from. He is regarded as a loner, and you never know which side he is on. Polytheus lives on its own little island on which he was hoarding his treasures. He is one of the most unusual creatures in Centopia, his body resembles that of a snake.