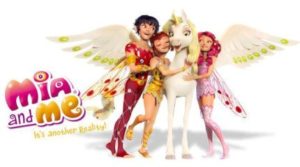 Mia and Me becomes an extensive 4D experience

The YUMBLE opens its doors in summer 2014 in Roermond, The Netherlands.
m4e licenses a fantastic Mia and Me 4D darkride.

Soon fans of Mia and Me can venture into the fantastic world of Centopia and experience their own adventures with Mia and her friends. m4e AG has given the Dutch company Brand New Leisure b.v. the rights to integrate Mia and Me into their innovative entertainment park concept in Roermond, The Netherlands, close to the German border. The Roermond YUMBLE is an integral concept with several attractions, the biggest of them will be the Mia and Me 4D darkride. There the visitors escort Mia to Centopia and support her in her fight against the evil Queen Panthea. All participants of this darkride will get the illusion to move as Elves through the stunning fantasy world of Centopia. The contentual implementation will be helmed by the brand’s rights holder Lucky Punch GmbH.

The YUMBLE is developed on the grounds of the Designer Outlet Roermond in The Netherlands. The outlet attracts more than 4.5 million visitors per year so far, making it one of Europe’s most successful venues of that kind. The YUMBLE concept combines retail with leisure in the most modern way. All of its attractions are based on popular brands, being multimedia simulations. The YUMBLE is planned to open to public in summer 2014.

This concept was introduced in the course of the Mia and Me summit on May 7th 2013 in Höhenkirchen, to which m4e AG invited all existing and future license partners for the Germanspeaking territories. There they received an overview on the present development of the brand Mia and Me as well as initial information about the story and the new protagonists of season 2, which is currently in production – including a variety of new unicorns. The 26 episodes of season 2 are planned for delivery by end of 2014/spring 2015. Likewise a feature film is in development, planned to hit the big cinema screens in 2015.

Do you already have some Mia and Me toy, game or puzzle?

This website uses cookies to improve your experience while you navigate through the website. Out of these, the cookies that are categorized as necessary are stored on your browser as they are essential for the working of basic functionalities of the website. We also use third-party cookies that help us analyze and understand how you use this website. These cookies will be stored in your browser only with your consent. You also have the option to opt-out of these cookies. But opting out of some of these cookies may affect your browsing experience.
Necessary Always Enabled

Any cookies that may not be particularly necessary for the website to function and is used specifically to collect user personal data via analytics, ads, other embedded contents are termed as non-necessary cookies. It is mandatory to procure user consent prior to running these cookies on your website.