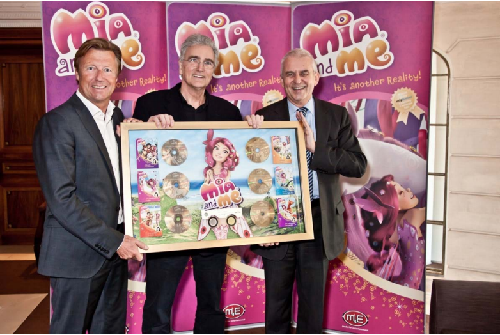 Three German Kids Awards in platinum and three in gold by the Association of the German Music Industry (BVMI) for more than 50,000 and 25,000 sold DVDs of several volumes of Mia and Me.

The success of the DVD product line of the TVseries Mia and Me was acknowledged by the Association of the the German Music Industry (BVMI) with six German Kids Awards in total. Volumes 1 to 3 were awarded with Platinum for more than 50,000 sold units, volumes 4, 5 and 7 with Gold for more than 25,000 sold units. The DVD series is published by the kids label of Panini Verlags GmbH.

„We are extremely happy that our series is so excellently received by Young and Old. We are proud of this award, being a reward for the hard and tireless work, and it keeps encouraging us to provide kids with more fantastic stories”, note Hans Ulrich Stoef and Gerhard Hahn.

Hermann Paul, Managing Director of Panini Verlags GmbH, adds: „In the history of Panini Germany we never reached such high sales numbers for kids DVDs. Thus we express our special thanks to all partners that helped making the property Mia and Me literally shine in platinum and gold, and of course to the m4e AG and Gerhard Hahn!”

Mia and Me is a production of Lucky Punch GmbH – a joint venture between m4e AG and Gerhard Hahn. The series was co-produced by Rainbow S.r.l., Italy, and Canada ’s March Entertainment, as well as ZDF German Television Network.

Mia and Me Season 2 of the hit series is already in production, planned for delivery by end of 2014/early 2015.